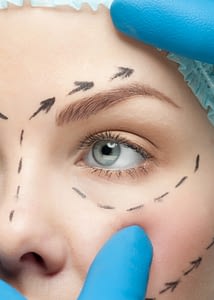 When a person has one or both eyelids that droop they have a condition known as ptosis. The lid may droop only slightly or it may cover the pupil entirely. It can affect both children and adults, and it doesn’t normally rectify itself without surgery. Dr. Shams performs ptosis surgery.

The most serious problem for children with ptosis is the potential to develop amblyopia, colloquially known as lazy eye. This condition develops in an eye that didn’t develop normal vision during early childhood. When ptosis is severe enough to block the vision in an eye, amblyopia can develop.

What are the symptoms of ptosis?

Ptosis shows itself in the drooping lid itself, and it can affect one or both eyes. If it is congenital, you may notice that the upper eyelid creases are not symmetrical.

Other symptoms can be associated with the child trying to overcome the condition either by tilting his or her neck backward in an attempt to see under the covering lid, or by attempting to raise the eyebrows in an attempt to lift up the lid below.

In children, ptosis is usually congenital, caused by poor development of the levator muscle that lifts the eyelids. Other eye-movement abnormalities may also be present.

In adults, ptosis develops with the separation or stretching of the levator muscle tendon from the eyelid. This can be a result of aging, injury, or it can develop after cataract or other eye surgery. It can also be a complication of another disease affecting the levator muscle.

When diagnosing ptosis, Dr. Shams will take detailed measurements of the height of the eyelids and will assess the strength of the levator muscles. Surgery is the usual treatment for both childhood and adult ptosis.

In childhood ptosis, mild or even moderate cases don’t require immediate surgery early in life. But special attention needs to be paid as the child ages to be sure he or she isn’t developing other conditions such as lazy eye, due to the ptosis.

Surgery involves tightening the levator muscle. If the condition is severe and the levator muscle is extremely weak, Dr. Shams may attach or suspend the lid from under the eyebrow so that the forehead muscles can be used to lift the eyelid.

Do you or your child have symptoms of ptosis? Make an appointment to see Dr. Shams before it becomes a more involved condition.

We have a facial nerve that stretches down each side of the face. These nerves allow us to laugh, smile, frown, and open and close our eyelids. Sometimes facial paralysis occurs when a person is Keep Reading ►
View Archive ►